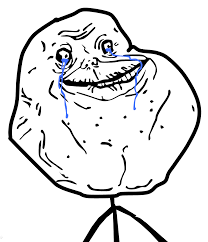 So, everyone. It’s getting to that time where I’ve been single for quite some time. AKA FOREVER ALONE.
Ugh, fuck me. (not literally, you pervert. you should be ashamed of yourself)
And yeah. That’s about it, guys. 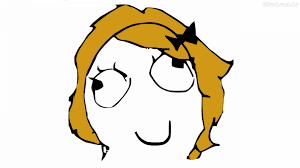 Hey, everyone. I just came back from a self-exploration journey; I went to Thailand and meditated like a boss under the waterfalls and shit.

I just forget that there are other people in this world.

Anywho, I feel that as crazy 17-year old girl, there is just so much that I want to rant about, that I can’t type fast enough so I actually forget what I want to say. Is that sad? Does that make me seem as if my attention span is just terrible? haha BUT AS I WAS SAYING. I have so much to talk about and my impatience does not allow me to sit down and actually type out every damn little petty trend or topic. SO, AS A RESULT, I have decided that whenever there’s just too much to talk about, I’ll most likely post a video instead. I feel much more comfortable knowing that I can spit out any insults/nonsense on camera and cutting it out if necessary muhaha. So, I give my apologies in advance.

So, tell me your opinions, everyone. IS IT WEIRD THAT WHEN I SEE THIS PICTURE, I IMAGINE MYSELF AS THE DOG? (I must dominate my significant other)
I KID I KID
Anyhow, onto what I really want to talk about. We’ve all heard of the phrase “friends with benefits.” And, we ALL assume the friends doing the naughty deeds. HOWEVER. Is it weird for me to just want that one friend to cuddle and give him a smooch every now and then FOR JUST THE HEY OF IT?! I mean, c’mon guys. We have ALL experienced that forever alone moment when you’re watching some romantic movie with your friendsies, and the main couple shares some Jack and Rose moment (I’M FLYING JACK). And, really, I JUST WANT TO FUCKING CUDDLE, ALRIGHT?! It’s so hard for high school adolescents to be “cuddly friends with benefits” without getting complicated AND not have to “put out.” Seriously, guys. Being pressured into sex will make me hate you forever . I’m so scared to even bring this subject up to anyone just because of the reactions I might get.

“What the fuck? You wanna cuddle without putting out? PRUDE!”
“Seriously? Grow up.”
“I want to be more than friends.”

Has anyone experienced this kind of relationship? Please, enlighten me.

For all you boys/men out there, I’m about to tell you a secret. In case you didn’t know, no matter where you are, there is always a woman farting.
Yes, people, farting. Flatulating, cutting the cheese, passing gas, letting one rip. WHATEVER SICK TERM YOU USE, there is always a woman farting. You’re probably thinking, If women were always farting, I would’ve heard at least one of them, right?

ERRRR, WRONG! You see guys, there’s a wonderful invention called the THONG. You see, the string/thin fabric separates our buns, preventing them from slapping each other as we create our brand of  “wind”

And now your life has been changed forever. You’re welcome.

I swear, relationships are pretty much unicorns. Everyone fantasizes about them and imagination goes wild when thinking about them. There are amazing expectations about them, but in the end, they both stink. (Hence, the farting unicorn)
I KID I KID
EVERYONE KNOWS RELATIONSHIPS DON’T EXIST!

alright, i was definitely joking (no, not really)

but all joking aside, relationships really can be a pain in the rear! And i haven’t even been in a legitimate one. KEYWORD: LEGITIMATE
I pretty much consider all high school relationships a joke, aside from those rare couples that actually get married in the end. And really, sometimes I am jealous of those ‘crazy chicks’ Why? Because, the harder they’ve cried, the stronger feelings they had; I am yet to experience that ‘rush’ of happiness and emotions when with that ‘special’ someone. Yes, i HAVE been with people, but cmon. I’M A HEARTLESS BITCH WITH A STONE FOR A HEART.
jk (i’m actually just a robot and i’m fucking with you all)

BUT REALLY. I am truly jealous of those who just CAN’T be away from their boyfriend/girlfriend. Is it just me? or have you felt the same?

So, I am just going to put it out there.
I’m a virgin.

Now, please don’t automatically imagine i’m some loner hermit that sits in my room all day (okay maybe just a little). However, I’ve had my share of boyfriends and frankly, I think i’m okay looking.
So I have a question for everyone: How long will you wait until you have sex? For time’s sake, I do believe in sex before marriage. I just believe that for one’s first time, they at least genuinely love or really like the person. Like most teens, my relationships have not lasted for more than two months. SO. Would I be considered a prude for wanting to wait until there’s a great amount of trust between my partner and me? Nowadays, it’s normal to be running through all bases within a week of a relationship. Honestly, that scares the shit outta me. Maybe because I’m inexperienced and I am yet to step out of my comfort zone.
Why am I talking about this? I’ve just entered a new relationship and this guy has been talking about sex before we were ‘official.’ And really, I’m OKAY with talking about it; although it can be a bit awkward since I’ve never had sex before, i’m not a total stranger to the subject. Now, he’s been asking where’s my ‘sexual independence’ and my sense of ‘I just want to have fun.’ Is he being pushy? or am I just being a prude? Do note that we’ve been together for six days. Yes, we’ve kissed. We haven’t made out yet, though, I’m quite sure it’s going to happen sometime this week haha.

So, I asked him how long he predicts until I finally ‘trust‘ him and we can have sex. He said two or three weeks. Now, the moment I read that, I thought “SHIT. That’s how long it’ll take him to get to second base!” Definitely no pressure there. Not at all! *twitch* help me.

I’m quite an outgoing person and definitely very, very, very, mellow. As a result of my awesome personality, a LOT of people assume that 1: I’ve had lots of boyfriends 2: I’m not a virgin
It gets pretty annoying actually because it’s hard to talk to people in a certain manner that won’t surprise them when I talk about ‘morals.” Yes, people. I have morals. A teen with morals?! WHAT?! (we’re endangered).

So that’s my rant for today. Obviously no one’s going to read through this if not just reading the first paragraph or so. BUT. Just going to put out there, someone knows what I’m talking about here and feels the exact same way.

I don’t guarantee interesting stories, but yknow what? You either exit the blog or you read for the hey of it. I honestly don’t care. Because you know why? Cause fk it. \m/